It was a perfect summer day for a perfect little summer music festival at Jack Lake.  Over 160 happy lakers (adults & kids alike) attended the first ever JLA music event.
Sincere thanks to Anthony & Lindsay Halcovitch at Forest Glen Marina for hosting, to Pat Hysenaj, Pete Bombaci, Laura Sharpe and JLA Events Director, Jonathan Mitchell for organizing.  And of course, hat’s off to the superb headliner bands, Red Leather - Yellow Leather, Poor Pelley and The Topshots, plus our feature surprise opening act, 10-year-old Paige Dove … a Jack Lake star in the making!
Thanks also to our daytime bayside performers, Pete, Pat, Adam and Matt and Blue Ray & the Jellyfish for entertaining over 100 smiling boaters.   This is the first such JLA event but judging by its success, it is only the start of many more to come!   Stay tuned Jack lakers (pun intended)! 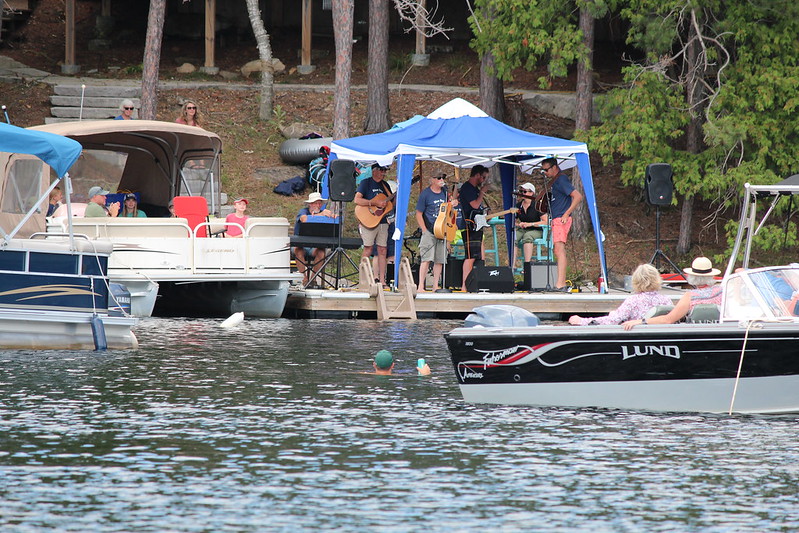 Come join us for a day full of musical talent showcasing the talent of our lake community. On The Bay music festival is set for Saturday, July 16th. Dockside performances at the entrance to Crane Bay (NE End of Sharpes Bay) and in Brooks Bay will run from 2 to 4pm. It’s never too late to pull out an instrument or your old 45’s and belt out your favourite tunes from your dock! Concert goers, just follow the music!
We are thrilled to announce our 3 headlining acts performing at Forest Glen Marina in the Yoga Pavilion from 5:30 to 8pm. Bring a lawn chair, maybe a picnic and enjoy the amazing talent.

Red Leather Yellow Leather (RLYL) is a Toronto band made up of an eclectic group of hobbyist musicians. Max Steinman plays rhythm guitar, Dan Porter (from The Townships) plays primarily keys, Matt Bohem plays lead guitar, Vic Adamo plays bass, and Ryan Mash is on the kit.
The band plays a healthy mix of indie rock originals and covers that keep their fans singing along and coming back for more.
All band mates share in trading on lead vocals with the exception of Ryan Mash, their savant drummer, who lives in the pocket and often zones out so much he has no clue where he is in the space-time continuum.

There are people who interpret a place in their art, in their song, in their work and there are people who are a place. Poor Pelly is Durham Region. Born in Oshawa, he has been drawing inspiration from this odd muse for decades. Durham's music scene has been rocked 'n rolled by Poor Pelly's solo work, his stint with the Kent Boys, and the ongoing on and off work with his band of brothers The Stables. Something he refers to as "the extended beginning to the continuous end". He has a style with deep roots in the purple woods of the Oak Ridges Moraine, a style that rises from the dark waters of Lake Ontario. Call it the Durham Sound, all it Black Grass, alt-country, Cow-punk, Folk-shock but don't call too early in the morning. On the record there is his solo disc, "Live From The Front Porch"; with the Kent Boys there are two albums, "A Horse No Man Could Ride" & "Atticus Finch"; with the Stables there is the Tour EP and the self titled full length. Still writing songs he has albums worth of material but remains far too "Poor Pelly" to find a way to get into the studio. The years he spent as host for open stages in Oshawa have entered legendary status. Not to mention cross Canada tours with the likes of U.S.S. & Cuff the Duke. Pelly is that guy. The guy that gives more than he takes. The audience is richer by the end of the night, it's true. There is a reason why he is called POOR Pelly.

The Topshots are a crossover band out of Toronto. Made up of punk rockers, they smooth things out, and may surprise you - doing justice to soul, ska and reggae classics along with many originals.
This weekend is a stripped down version of the band - just a three piece, instead of the usual five man outfit.